Here are the Real Reasons Absinthe is So Expensive

by Jessica Smith 1 month ago1 month ago
11views
0

Expensive  Absinthe possesses a romantic yet hair-raising mystique and has been used for hundreds of years. It was first used during ancient Greek times to make medicine. The process involved using absinthe’s main ingredient – Artemisia absinthium. However, when its alcoholic version hit France, many cases, such as addiction, madness, and murder, began to rise exponentially. As a result, the US and European nations had to ban absinthe in the 20th century.

Although absinthe can be hallucinogenic, the US re-legalized it in 2007 because its thujone levels – which are present in wormwood – were below 10 parts per million in every bottle. Ever since, various mixologists have embraced the licorice-tinged, high-alcohol ingredient in cocktails such as punches, swizzles, and Coladas.

If you opt to craft your absinthe drops in the comfort of your home, you need to purchase absinthe bottles. However, they tend to be quite pricey for various reasons. This post will discuss some of the reasons why absinthe is expensive. Read on to learn more about “The Green Fairy” and where to buy absinthe. 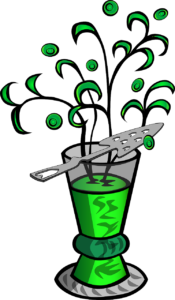 Real absinthe costs around $45 for every bottle, while the macerated variety costs $35. The difference between these varieties is that the maceration process is less costly than distilled versions which are easier and softer to drink.

Generally, absinthe manufacturers develop high-quality absinthe via a lengthy and tenuous process that commences with botanicals and herbs, which are infused in neutral spirits for about 12 to 24 hours. Consequently, the ingredients undergo a distillation process and a second infusion that gives absinthe its characteristic green color and enhances its aroma and flavor. Here, the manufacturers can add more herbs, followed by a proofing process and aging in steel tanks or oak barrels to improve oxygenation for more than one year.

Besides the lengthy and tenuous process involved in making absinthe, raw materials are also part of why absinthe costs so much. According to Difford’s Guide, absinthe’s holy trinity of ingredients comprises green anise, grande wormwood, and Florence fennel. In addition, absinthe also has extra ingredients such as petite wormwood, lemon balm, and hyssop.

Most of these ingredients are pretty popular and easy to grow, but Florence fennel seeds are expensive and can be very hard to find. Furthermore, petite wormwood is mainly grown in certain climatic conditions, such as those available in the Mediterranean.

You should not judge spirits by their color, but color can sometimes give you an idea of what you’re consuming. Most of the absinthes vary in color from chartreuse green to chartreuse yellow, and they can also be clear. Another thing you should look out for is that absinthe is dyed naturally, and it obtains its distinct color from chlorophyll in the macerated herbs.

Traditionally, absinthe is consumed by putting a slotted spoon using a sugar cube on a glass of absinthe and then dripping ice-cold water slowly from the absinthe fountain. Doing so gradually dissolves the sugar cube in your glass. However, some people prefer to use dripping ice water without any sugar.

The Czech Republic popularized using a flaming sugar cube, which is often seen in movies. The flaming sugar cube generates a cinematic effect, and it’s fascinating to people who feel like they’re doing an illicit activity.

The answer is no, although it’s debatable. When absinthe was at its peak in popularity, many people made their homemade batches, such as moonshine or bathtub gin, and the quality varied significantly. As a result, some people experienced some nasty impacts due to extra ingredients that shouldn’t have been used or a form of shoddy distillation that made moonshine drinkers from all over the world go blind if they drank it carelessly.

Most importantly, absinthe is very strong, more than your average gin or whisky. Most old-school absinthe recipes range around 68% and 72% alcohol. This meant that people in Parisian cafes who had a fountain of absinthe all day long were becoming wholly wasted. This became even worse if you were also using hard drugs, which explains why people thought absinthe was hallucinogenic in the past.

Absinthe became illegal due to various reasons. First, absinthe’s tremendous growth in popularity concurred with the Great French Wine Blight. During this time, Phylloxera destroyed almost every vineyard in the country, making wine too expensive and rare for the most significant part of the population.

After a few years, the vineyards recovered, and the wine industry was poised to make a comeback. However, the robust wine industry conducted a smear campaign against absinthe, which had become the most popular drink in the country. The smear campaign highlighted several murders and other crimes for which absinthe was supposedly responsible.

Presently, many countries have different legal definitions for Expensive  spirits. For instance, bourbon produced in the US has to be not less than 51% corn and aged in a charred oak barrel. In Switzerland, you can only label your product absinthe if it has undergone the distillation process, has no specified additives, and has no natural coloring.

With its soaring ABV, polarizing anise flavor, and top-shelf prices, absinthe looks like it will remain a niche tipple for the coming decades. Its sometimes-sordid history solidifies its position of being a living liquor legend.